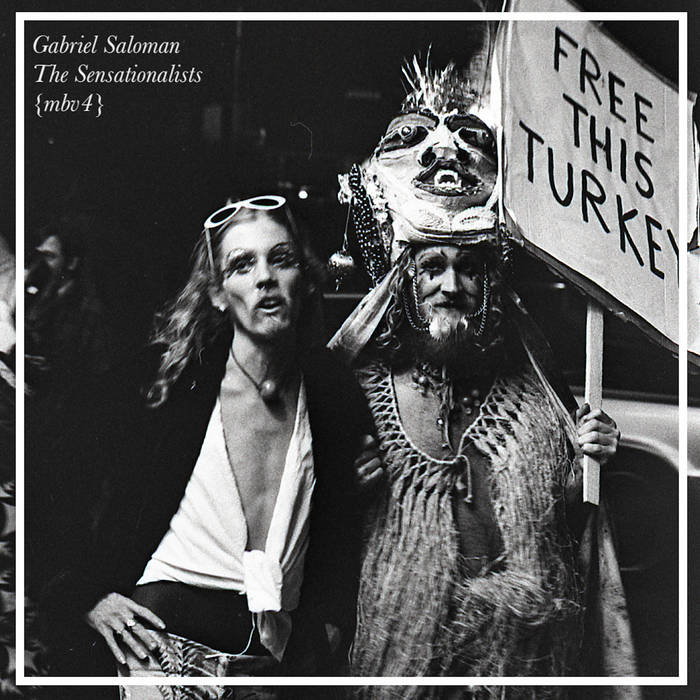 Available for DL and on lmtd edition CS @
beaconsound.bandcamp.com

All music by GMS (Guitar, Percussion).

Mastered by Jason Powers.
Recorded and produced at the STAG in Vancouver, Coast Salish Territories, 2013-2014.

'The Sensationalists' takes its title from the dance piece by Company 605 and Theatre Replacement for which it was created. This is the same project for which Saloman's 'Movement Building Vol 2' (Shelter Press, 2015) was composed. Indeed, in many ways this could be considered 'Vol 4' of that series, with these three tracks, in their rhythmic urgency, representing the climax of the performance. The dance piece evolved into a meta-narrative about a secret society in pursuit of cathartic embodiment; in the artist's mind he had personally "always imagined it as a tribute to the community of radical faeries, gender-terrorists and anarchic-queens who have been a source of influence and inspiration for decades". The cover art is thus a photo of the Angels Of Light, an anarchic free theater group of glitter beards and genderfuckers connected to the Cockettes and the Diggers. As Saloman writes, "We have so much to learn about resilience, love and fearlessness from the generation who faced down the early phase of the crisis, in the face of governmental neglect and societal indifference. We have so much to learn from the will to resist and fight under these conditions, from ACT UP and other radical groups who fought these conditions even as they and their loved ones were dying from the disease".

50% of the proceeds from the sale of this release will go to the Cascade AIDS Project.

Each cassette will be housed in letterpressed Stumptown packaging and will include an insert featuring powerful liner notes by the artist.

*Note: These cassettes will ship in about 30 days. If you've recently "subscribed" to this year's releases via our website's donor window you will automatically receive a copy.